All Roads Lead To NYC 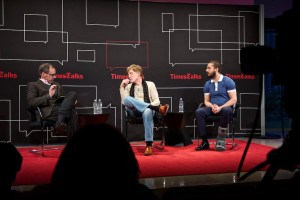 It was supposed to have been an evening about Robert Redford. It soon became clear, if not surprising, the host, irrepressible NYTimes media reporter, David Carr, would be the one to steal the show. And did he ever! The goateed Carr, who affects a slightly disheveled style, is a celebrity in his own right. Blunt to a fault, charismatic, provocative, and entertaining, he was prominently featured in the 2010 documentary “Page One: Inside the New York Times” for good reason. His gritty best selling memoir “The Night of the Gun” tells of his recovery from cocaine addiction. Any event featuring Carr is a performance that delivers humor, salty language, and stimulating conversation. During TimesTalks, on April 2nd, the Redford-LaBeouf combo along with Carr drew a full house and did not disappoint in that regard. 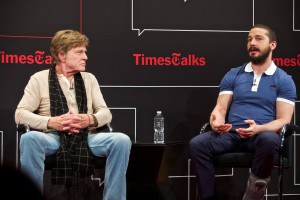 In contrast to the unrestrained Carr, Robert Redford is low-key, agreeable, and somewhat timid. At age 76, he appears youthful, fit , and agile as he bounces onto the stage. He is recognizably all Butch Cassidy & Sundance Kid Redford. The years have been kind to him. A couple of times, while suffering an obviously nerve-induced momentary memory lapse, the embarrassed Hollywood legend, alluding to the pressure of the moment, joked he feared experiencing a meltdown. He rarely does interviews and shuns public appearances. His self-described life-long pattern is one of retreating and resurfacing. When he addresses his reclusiveness, the setting is of course, Sundance, Utah where he bought the first two acres in the 1960’s. He has re-emerged, in New York, to promote his latest directorial undertaking, the thriller ” The Company You Keep”(2012), in which he co-stars with LaBeouf. An impressive ensemble cast features Susan Sarandon, Julie Christie, Stanley Tucci, and Nick Nolte. The story revolves around a fictional character who had been associated with the U.S. 1960’s clandestine radical group the Weather Underground. It is based on a 2003 novel by the same name, by Neil Gordon. It premiered in NYC on April 1, at the Museum of Modern Art, but saw its first screening at the 2012 Venice Film Festival and received mixed reviews as it made the rounds of the 2012 film festival circuit. 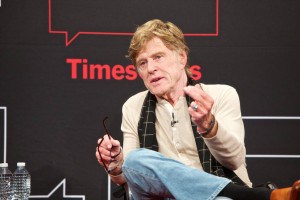 Since the topic of the film encompasses journalism and politics, the conversation inevitably veered to the media and the current U. S. political landscape. Carr and Redford seemed at ease with both subjects. Redford recalled the in depth research required for his role in the 1976 film “All the President’s Men” about the Watergate scandal during the Nixon administration. However, around thirty seven minutes into the TimeTalks program, the interview, live-streamed around the globe, seemed to figuratively come to an unscripted halt.

Characteristically, David Carr threw a zinger, stunning and upstaging Redford as he recounted casting Julie Christie, her activism in real life, and the opposing views of the characters she and Redford play in the film in the context of the Weather Underground’s history.

Anatomy of the Carr Zinger:

CARR:”You’ve got, we’ve got a black president,the needs of the many are being discussed…”

REDFORD: “I know, Mitch McConnell* keeps talking about it.”

CARR: “And so Obama’s second term, in a certain, he is a movement guy, a community guy organizer himself. The needs of the few- they may not mention assault weapons but we are talking about gun control. So, on the one hand, they**  were wrong, and America can self-correct and do different things. 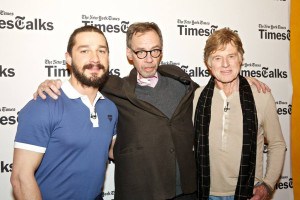 On the other hand we have a president who runs the least transparent administration in history- it’s used the espionage act to attack journalism and whistleblowers at every turn, has a kill list and it’s working with a variety of private contractors to eliminate american opponents all over the world and sometimes in what are called wars and sometimes what are called something else, so in a way they were right and wrong about everything, everything they were afraid came true but a lot of things they didn’t anticipate came true.”

The discomfort on Redford’s face was visible. In the audience it was palpable. Carr ‘s tone: declarative. Carr’s demeanor: deliberate and unflappable.

What had just happened and why? What does David Carr know? It seemed hardly appropriate at that moment to hear such an unqualified accusatory assertion from a NYTimes reporter and without the opportunity to follow-up in a Q & A .

An evening about the art of cinema turned on its head.

•Addison Mitchell “Mitch” McConnell, Jr. is the senior United States Senator from Kentucky. A member of the Republican Party, he has been the Minority Leader of the Senate since January 3, 2007.