All roads lead to NYC

Soldiering on- the Abramovic Method 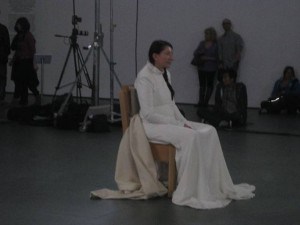 Control, focus, commitment, obsession, idea. The words roll out of Belgrade-born Marina Abramovic’s mouth with surgical precision and detachment when describing herself as an artist. Without skipping a beat she adds: to be an artist you have to be a soldier. She is soft spoken but military lingo is in her DNA. Drawn by reporter Patricia Cohen to elaborate at some length on her adolescence, we are led to believe this mind frame was beaten into her by her abusive Serbian mother. Slapped, to be precise, which Marina demonstrates, casually, with a wave of her pale well- manicured right hand. Both parents were high-ranking partisan army officers in the former Yugoslavia during the Josip Broz regime. She believes the disciplinarian and castigating maternal upbringing is responsible for her strong work ethic, for which she is quick to express her gratitude to her mom, Major Danica, who in the 1960’s became director of the Belgrade Museum of Revolution and Art.

On this windy evening in NYC on March 15, 2013, as a guest of NYTimes sponsored, Times Talks, proof of her resolve and professed Abramovic Method became apparent immediately. As the conversation with Patricia Cohen*, cultural reporter for the Times got underway, Marina Abramovic without acknowledging the attempt at humor in Cohen’s introduction, digressed and firmly set the rules for the evening, warning Cohen she would not be looking at her during their conversation but would instead direct her gaze and attention to the audience . “They are the really important” she summed up in somewhat broken English. “Of course, right”, Cohen mumbled back solicitous but slightly dejected. 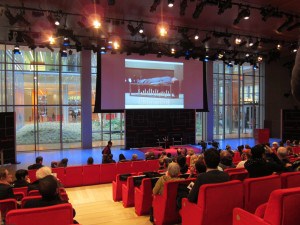 The tone for the evening was set, Marina was in total command. Of everything. She is, unquestionably, a control freak. As the evening progressed, she did not hide her frustration with technical glitches, coolly imparting orders to the control room when a slide was projected out of order or lingered on the screen, no longer topical. She interrupted Cohen’s train thought repeatedly, insisting the golden mask video be shown in a particular order of her design. The longer it took, the more peeved she became. By the time it flashed across the screen as the event was coming to a close, it fell somewhat flat, though it drew the applause of her faithful followers.

Talk turned to her collaboration on Robert Wilson’s quasi opera The Life and Death of  Marina Abramovic. Memories of the time consumed by this endeavor drew the first signs of emotion: sighs of incredulity and frustration. The pace of rehearsals, the waiting, the repetition was all unfamiliar territory for Marina. Patience, as she herself admits, is not one of her virtues. She described her collaboration with Robert Wilson as a harrowing experience which exacerbated her tolerance to the limit. Abramovic also painted Wilson as a maniac, hardly aware she could have been speaking about herself. Reviews of the work have been mixed and Abramovic seemed to attempt to distance herself from it, pointing out this was really Wilson’s Life and Death of Marina Abramovic.
Some Highlights 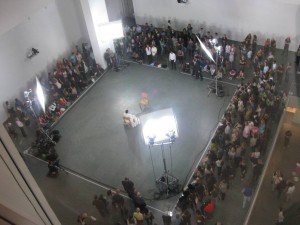 Inevitably, the name of her former artistic and life partner, Ulay  (Uwe Laysiepen) came up. Abramovic did not appreciate the question; What did she think of Ulay’s comment that her success has driven her to become a member of the establishment. Before responding, her body language said it all. She is thin-skinned. She denied it was true- but she did so unconvincingly. Sounding more like a P.R. operative- than an artist. Turning to the subject of the Hudson Art Center/ Lab and fund raising while pleading the proverbial artist’s poverty- a picture of what looked like a sterile inhospitable clinic appeared on the large screen on the stage. Visitors, she explained, would be wearing white lab smocks and be obliged to sit on wheelchairs during a six hour visit pre-convened via a signed contract. The prospect was most unappealing.

And then, during the Q&A, an unscripted refreshing revolt:

” Your work is all about nudity” spoken in a halting yet accusatory form by a speech impaired member of the audience. As it turned out, a group of disabled activist women were in attendance at Times Talk. Two of them got hold of the mike. The first questioner, with a severe speech impediment managed to berate Marina for using only models with perfect toned bodies to reproduce her works. Would she consider using disabled, obese, handicapped, in sum, imperfect human specimens? Marina’s response addressed the physical conditioning and endurance required of her performers. She was categorical. She expressed gratitude for the question and added,

When questioned by this reporter concerning Neuroscience Experiment I and the uninspired, oxymoronic, and dreadfully kitschy title Measuring the Magic of Mutual Gaze, Abramovic swiftly seemed to contradict what she had expressed during WNYC’s Brian Lehrer brain awareness program only two days earlier. Though she acknowledged that magic cannot be measured, she blamed the scientists for the title of her new art performance project and was dismissive of her earlier assertion that art is more about posing questions than providing answers. She previously articulated this position as follows on Brian Lehrer’s program: ” Art is sometimes to ask questions, to actually ask the question not necessary getting answers”. One understood her message to convey it is questions which generate art..

Spontaneity and warmth is hardly a sense one gets from Marina Abramovic. Quite the contrary. She projects a kind of steely self-control wrapped in a magic luminescence and charisma which sets her apart from everyone else. You are forced to enter the hermetically controlled and regimented world of the Abramovic Method without actually knowing what it is or where it is taking you. You are drawn to a leap of faith by Abramovic’s deliberate cajoling, testing, seduction, provocation intended to, however briefly, provide the false impression you are the protagonist and in control. Ultimately, it is a leap of faith which 750.000 visitors willingly waited for hours in front of MOMA to experience. A great many emerged as followers, enablers of the movement Marina Abramovic is consolidating in upstate Hudson, NY. The white lab smocks are waiting. Start lining-up…..
*Patricia Cohen is listed as someone covering ideas and intellectual life.
From NYC, Isabel Bau Madden