A glimpse at Danilo Kiš in the Big Apple, begins at the airport,  where I found myself awaiting his arrival , on more than one occasion in the 1980’s. This involved not only the anxious anticipation of greeting a beloved friend, but also a kind of call to duty, as guide, interpreter, and protector throughout his sojourn in Gotham. His companion, Pascale Delpech, was delegating the task to me over the phone from Paris. In a French-accented Serbian, she described it, with a dose of humor, as the role of a “dadilja”, a nanny. Understandably, it may be difficult for some to imagine Kiš, who had experienced so much adversity since a young age, including the death of his father in Auschwitz, as someone unable to fend for himself. 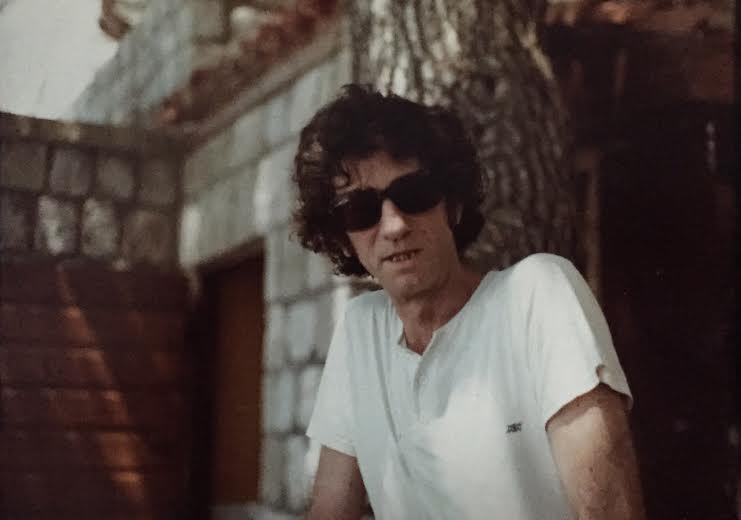 Yet, upon crossing the ocean, to the U.S. he revealed a certain vulnerability here, most likely due in part to the fact he did not speak English. At play, also, was a charming mix of insecurity and timidity I had not observed before.  The combination made it seem he was making his way into NYC on his tiptoes, slipping in quietly through a side door, trying to avoid attention.  Kiš wished for this invisibility, in particular, while navigating the airport maze of corridors and lines,  and the uniforms associated with the dreaded bureaucratic formalities of passport control and customs.  It all felt less intimidating knowing I was, so to say, within shouting distance. Standing behind the barrier at the arrivals area,  I could virtually hear in my mind his baritone beckoning my presence, using my nickname. “Gde si, Žabooo?!”   Where are you? as the sliding door opened and he set foot in NYC for the very first time.

Here  I am. Welcome, Daniluša!

His signature hairstyle, the curly and silky mop, blowing in the wind like a torch, was the exclamation point that really confirmed to me Danilo Kiš had indeed arrived.  I was greeted with a sigh of relief,  followed immediately by the spiraling heavy smoke of a Gauloise cigarette which usually enveloped him.

I never kept a diary, took notes, or shot a single photograph of Danilo Kiš during his visits to NYC.  In summoning up these remembrances, the title of Nabokov’s autobiography, “Memory, speak”, resonates acutely.  Though invariably we remember important moments, I deeply regret not having video recorded Danilo’s American odyssey and reproach myself the omission. 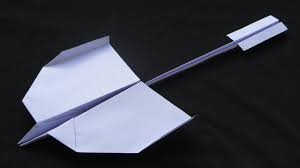 A sample of Origami swallow paper airplane such as Kiš made

Unreeling before you is the New York City version of Danilo Kiš, an impression somewhat different from the rather more extroverted and unwound Kiš I met up with during summers in Dubrovnik, at the hotel Argentina.  Or the Kiš I was introduced to, in Belgrade, in the late 1970’s. But maybe it was all a matter of time and language, we will never know. However,  NYC suited Kiš very well.

At the Argentina,  an uninhibited and charming Danilo Kiš captivated us with his soulful songs- which he would usually perform, by crouching next to a piano, a glass in one hand, a cigarette in the other. Impossible to forget are the playful moments with my 5 year-old son Sean and the skill of Kiš’s long fingers producing  origami-like swallow paper airplanes they would toss from the steep terraces overlooking the Adriatic.  Some years later, Kiš would do so again, in New York City,  from our balcony overlooking Central Park,  just as  Antoine de Saint-Exupéry had done, at the very same address,  in the early 1940’s, from his apartment, reportedly on the 23rd floor, while writing The Little Prince.

Here, in the Big Apple, as my luck would have it, Danilo Kiš dragged me everywhere with him. I found myself tagging along on what turned out to be among the most memorable times I’ve ever experienced in NYC. Moments which reminded me of life in my native Buenos Aires and the rather closed literary circle in which my parents moved.  The worlds of Gombrowicz, Borges, Bioy Casares, Girri, Sábato, Murena, among others.   This tightly knit impenetrable world existed in NYC as well. However, by the early1980’s the doors of the legendary publisher Farrar, Straus, Giroux had opened to Kiš. Robert Silvers, the editor of the New York Review of Books had also embraced him.   The tragic circumstances surrounding Kiš’s health, a lung malignancy,  which drew us even closer at the end of 1986, again in NY, were unfathomable at the time of Kiš’s first landing New York City.

During his second trip to the U.S. in January 1986, as a guest of PEN, Danilo could not escape the spotlight  throughout the conference conceived by the colorful and outspoken American PEN president Norman Mailer.  Susan Sontag, who became a good friend to Kiš, made sure of that. 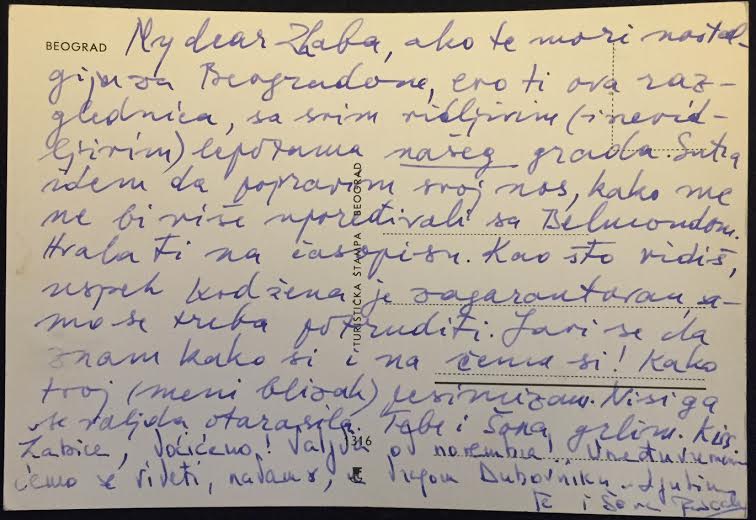 A postcard from Danilo Kiš thanking Isabel for sending the New York Magazine article and kidding about being portrayed as the “literary Jean-Paul Belmondo”.

At the time, in a long review of that historical PEN Congress, Rhoda Koenig wrote in New York Magazine about her own distinctive encounter with Kiš this way:   “According to opinions from both sexes, the best-looking delegate was the happy approachable Vargas Llosa (isn’t he unbearably handsome cried a woman in front of me at one panel), but the most appealing was Danilo Kiš, variously referred to as “that charismatic Yugoslav” and the literary Jean-Paul Belmondo”. Talk about not being able to judge a writer by his book cover- Kiš is the author of A tomb for Boris Davidovich, an excellent but horribly grim novel that the jacket blurb describes as a “fictionalized account of the self-destruction of (the) Comintern”. At the library party, I discovered a slender, smiling man with bushy hair leaning against a column and, when I conveyed my admiration, was told I was “adorable et charmante” (Kis’s English is minimal) and got my hand kissed, or, rather inhaled. Later, I returned to his corner to find him draped with pretty girls. “You seem to have many ladies”, I remarked in French. “Oui”, he sighed, the smoke from his Gauloise describing a trajectory of brooding resignation, “J’ai toujours beaucoup de femmes. Ça march très bien au commencement.”  Kiš acknowledged that meeting writers can be disillusioning: “I met my great hero, Roland Barthes, and he was exactement comme un marchand de poissons”.

Dobrodošao, Daniluša!  The gates to NYC were opening wide to him.