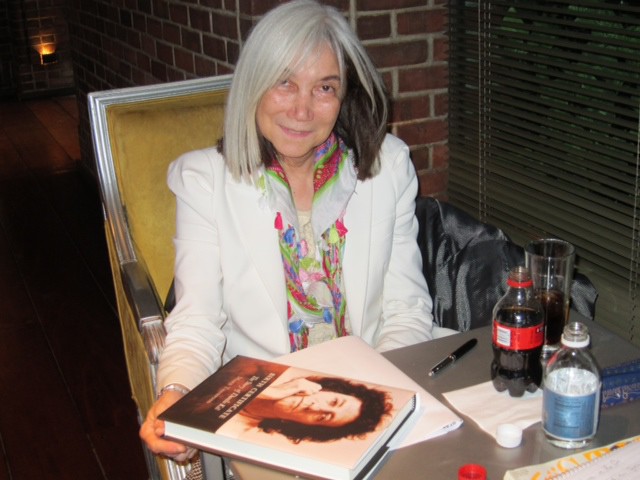 By coincidence, this is how it happened:

I last interviewed Maria Kodama, Jorge Luis Borges’s widow, in the winter of 1999. We met briefly, last year, at the Cervantes Institute in New York City, on the occasion of the Atlas by Borges photo exhibit. I did not hear from her after the event, though there was mention of getting together for coffee. It did not disappoint me. There is something fleeting, ethereal about Maria Kodama. And then, a few weeks ago, we simply bumped into each other on a bright spring day on West 57th street, a very busy Manhattan artery. By sheer happenstance, it took place directly across the Hemisphere House, an address, in my mind, forever associated with the suicide of the Polish writer Jerzy Kosinski, in May of 1991. So, our unexpected encounter, took place along this invisible tragic literary labyrinth of a Borgesian nature. A story I became deeply immersed in at the time and one which haunts me to this day. I pass here often, and the Kosinski puzzle, fact and fiction, is omnipresent.

But here was Maria Kodama; what serendipity! Maria Kodama recognizable a mile away. Just as Susan Sontag had her personal ID, the white streak in her hair, Kodama’s top layer is snow white, and underneath, it is dark brown. You can’t miss her; Maria Kodama! 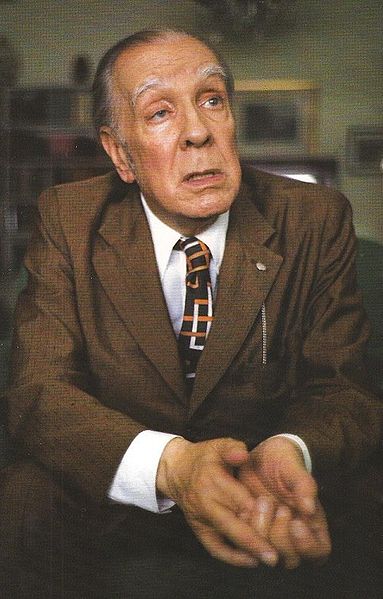 Among the first words to roll out of Maria Kodama’s mouth in 1999, were:” The last twelve years have been hell”, referring to a small group of detractors intent on making her life miserable. It has been a particularly nasty onslaught she has endured since Borges’s death. Spoken almost in a whisper, the voice belonged to the widow of the Argentine writer Jorge Luis Borges. The scorching comment at the time echoed Sartre’s existential manifesto “hell is other people”. The contained tone in which they were spoken belied the message but not the messenger. That Maria Kodama could utter them with such self-control was a testimony to her extraordinary resilience. Her Japanese heritage to some extent seems to explain her temperance.

Since Borges’s death in Geneva in 1986, Maria Kodama has been assailed, reviled, and maligned by this indefatigable bunch of adversaries who continue to attempt, to this day ,to sabotage what she considers to be her life mission: to protect and preserve her husband’s legacy.

On this occasion, we are sitting across from each other thirteen years later. It is a different Maria Kodama. Defiant – but resigned. She smiles and says that the aggression no longer affects her. I can hear a sigh of relief, though her gaze, if somewhat more relaxed, betrays the sentiment. There is still a steely determination and perseverance. One can’t but assume it is in her genes.

We jump from subject to subject. We reminisce about Alberto Girri, the dashing and celebrated late Argentine poet, who brought us together in the first place. About the Borges Foundation. About the note Borges wrote to my father in1964. I bring her a copy to keep. About Danilo Kis, whose just published biography “Birth Certificate” by Mark Thompson, I brought along. About Jorge Cruz, the legendary former editor of the literary supplement of the Argentine daily La Nación. I share personal memories of Witold Gombrowicz, the Polish writer, disliked by Borges, who lived in Argentina for over two decades. About the great Olga Orozco, the late poetess from La Pampa, Argentina. Girri, Orozco, Cruz, Kodama were part of a literary group which convened at the Edelweiss restaurant in Buenos Aires , once a month, for decades. She offers tips about interesting artistic events she has attended during her brief stay in NYC, a city she loves. 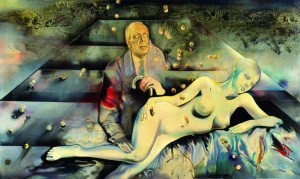 And then, at my very mention of her visit to Belgrade in 1996, Maria Kodama simply lights up. Her eyes gain a sparkle. She begins to giggle in an almost adolescent manner. Oh what fun she had! She cannot thank me enough for the memories though I had nothing to do with them. The occasion was a Symposium on Borges at the National Library, ten years after his passing. The mention of Belgrade elicited this tickled reaction. She expresses her gratitude over and over, as she reminisces about her visit. She does recall partying with Silvia Monros Stojakovic but has forgotten her name. She asks me to spell it and writes it down. I remind her of her visit with Olja Ivanjicki at her atelier on Kosancicev Venac, a charming cobblestone street by the Sava river.

She remembers wine flowing, songs, lots of singing, dance, lots of dancing, and a smoky grill piled with meat! She is a teetotaler and a strict vegetarian, so what she took most to was dancing. She loves to dance. ” Me encanta bailar” she tells me. It is not something I have come to expect to hear from Maria. She is usually reserved and now sounded, well, exuberant. Could she have danced all night? I had never seen her so animated. Belgrade, in sum, seduced her. The singing, she observes, impressed her in particular, because it struck her as very patriotic. The melodies sounded like marches. At the time, she thought to herself : ” I will never experience such feelings” Why? Because she is half German, half Japanese, and Argentine. A mutt of sorts. The concept of allegiance to one nation is completely foreign to her.

She remembers being invited to a forest and asking an Argentine colleague to join her in the mysterious adventure to the Serbian woods. I figured she must be referring to the delta called Ada Ciganlija. From Belgrade, Kodama traveled to Montenegro. Upon setting eyes on the seacoast, I suspect it was Budva, she was so taken with the landscape, her inner voice regretted Borges was not with her to behold the beauty of the region which she described in detail. But just at that very moment of her lamenting Borges’s absence, she heard a melody on a piano, Fascinación. She immediately recognized it as a favorite of Borges’s mother , Leonor. This, Kodama thought, was a sign Borges was accompanying her after all. 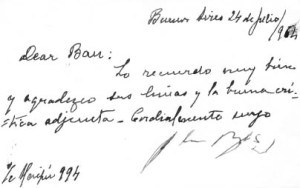 Danilo Kis, staring at us from the cover of Birth Certificate throughout. I introduce Kis and the volume to Kodama. She smiles again. The bond between the two writers acknowledged in the index, Kodama takes notes.

Maria Kodama is a peripatetic traveler, constantly on the move. However, the miles don’t show. She does not ever take vacations. She winces at the very idea. Instead all her journeys are Borges related. Borges is invariably the wind under her wings. Always Borges. During our meeting at the Hudson Hotel, she is approached twice by strangers who upon seeing her, blurt out : Borges! No, I correct them, Maria Kodama. She smiles. On 57th Street she was recognized by two Argentine tourists who politely requested to have a photo taken with her. She posed graciously though she does not like to be photographed.

Maria Kodama. There is a melody to the name. Her voice is soft, calm, soothing. I close my eyes for a second, just to hear her voice. You cannot not see her. 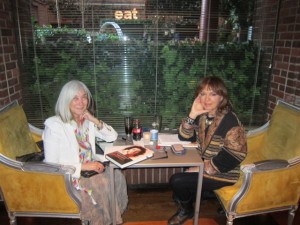 Yet , it has not been easy being Maria Kodama. But nothing deters her. Her stamina unaffected by jet lag – she ends her day, very often after midnight, with a cup of coffee, just before turning off the light, sometimes as late as 4am. She readily admits she is addicted to caffeine. What keeps most people wide awake, does not have the same effect on Maria. In fact she does not need much sleep. One way or the other, you are left with the impression Borges is always on her mind. This time around an event at the Institute of the Americas has brought her to New York. Soon she will be traveling to Barcelona. But first she is returning to Buenos Aires. We are talking about such great distances which she zig zags with ease. I had written long ago about how she seeks solace and peace in the desert. Apparently she is also in her element, high up, flying, on the move, teaching and promoting the literary legacy of one the greatest and most influential writers of the 20th century.

Fascinación. Listen to it. It should prove evocative of Borges and Kodama.

Maria, the unpredictable presence around every corner? Look out! You may run into her in Belgrade, again.

About the composer of Fascinación:

Fermo Dante Marchetti (born Dante Pilade Marchetti, 28 August 1876 – 11 June 1940,) was an Italian songwriter, best known for the music for the song “Fascinación”. He was born in Massa Carrara, Tuscany, Italy and died in Paris, France.