The Master of Mischief 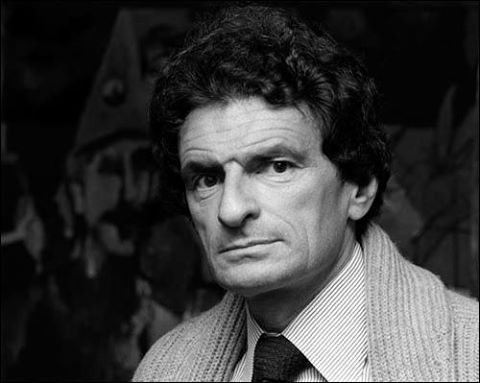 “What are you doing in fifteen minutes?”

Out of the blue, novelist Jerzy Kosiński would appear as others only appear in a dream. 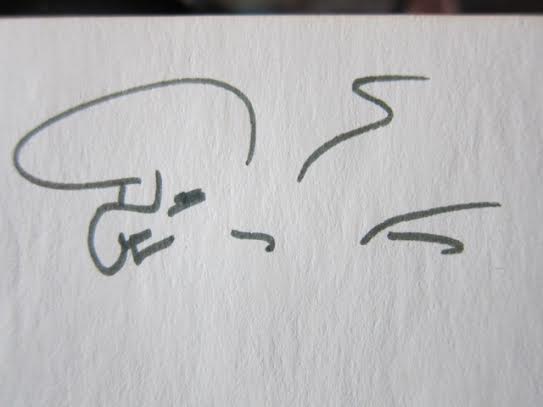 Kosiński’s own caricature of his profile, photo© Isabel Bau Madden

Reveling in mischief, Kosiński seduced and cajoled with electrifying intensity. There was a sense of performance, that it was all about showmanship. Or some kind of test. Or a trick.  It was difficult to distinguish reality from fiction.  Was it all an act?  These spur-of-the moment invitations, arriving by fax, signed with a self-caricature, demanded immediate attention.

Talking my way out of these hasty improvisations, I felt under microscopic scrutiny.  Yet each time we spoke again, it was as if we had never spoken before. There was no real sense of time or place in Kosiński’s impetuous universe.  A year before his suicide, there was the familiar urgency, anxiety, and curiosity.

And then, on May 3, 1991, as New York City slept, Jerzy Kosiński slid into a warm tub and suffocated himself with a plastic bag. To those who had heard about his disguises, his sexual preference for young girls, his late night visits to seedy dockside gay and S & M bars, Kosiński’s last act was but a piece of the puzzle of his tortured myth, the chameleon’s final masquerade, Jerzy the Joker’s last prank in Gotham City. 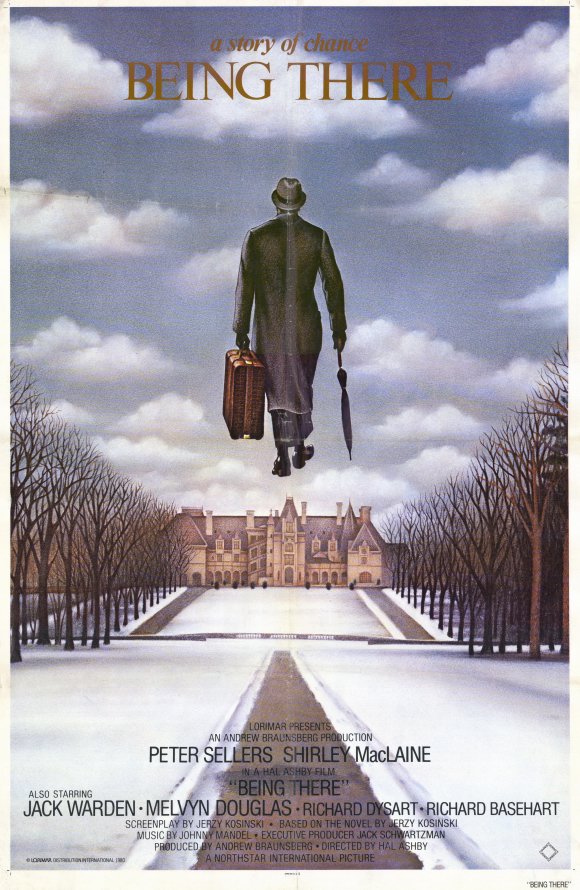 Poster of film Being There ( from Wikipedia)

Though Kosiński had been complaining about his heart, memory problems and chemical depressions due to the battery of pills he was taking, he nevertheless continued to live at a furious pace.

At the time of his death, he was married to a former account executive at an ad agency who had began living with him while Kosiński was still married to multimillionaire Mary Weir.  But there was a new woman in his life, the sultry red-haired Polish jazz singer Urszula Dudziak who had been voted “Most Promising Female Vocalist” in 1975 by Downbeat and whose vocal range had earned her the label of ” The Yma Sumac of Jazz”.

In fact, it was with Miss Dudziak he spent the last night of his life. At around 8pm., he met her for dinner at Wolf’s Deli on 57th Street. They later caught the 9:25 show of Peter Greenaway’s film Drowning by Numbers. “It was a long film “, Ms. Dudziak remembered.   “Sometime after 11pm,, we walked over to the Parker Meridien bar. We left after they had already closed, sometime after midnight. I walked to the door of his building. A few minutes later, when I arrived in my apartment, he telephoned to check that I had made it home all right. He told me ” You looked beautiful tonight Ulenjko”. We made plans to go to Central Park the next day. His last words to me were “I will call you when I wake up.”

In an interview in 1987, the famed author of The Painted Bird candidly observed, ” I am full of life, and as long as I am alive I will keep repeating into the mirror: Life, thank you  for having created Kosiński”. 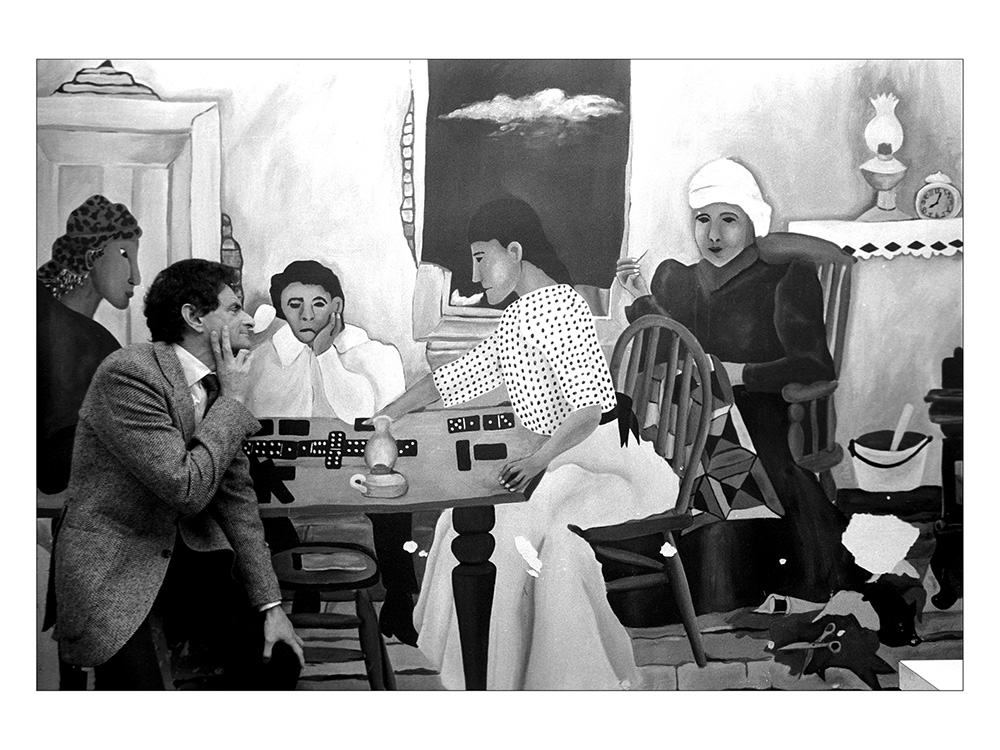 By early 1991, Kosiński’s prayer to his own self-invention and reinvention and to the imaginative energy that generated it no longer seemed to serve him. “There are days I see myself as a profoundly heroic figure” he told a reporter for Toronto’s Globe and Mail only days before his macabre suicide. “and there are days” he continued , “when I see myself as a decrepit figure about to die”.

On the late night of May 3, Kosiński, entered his building, Hemisphere House, on 57th Street and 6th Avenue plotting his demise.  He must have tiptoed to his bedroom past the curtain behind which he could hear his wife breathing as she slept.  What he saw in his bathroom mirror sometime before dawn led him to smother himself with a plastic bag.  He left a suicide note behind. It read:  “I am going to put myself to sleep now for a bit longer than usual. Call it Eternity”.

When I last encountered Kosiński, in the spring of 1990, we met for dinner at a casual neighborhood French bistro, Larré’s on Seventh Avenue, a few blocks from his home.   As I approached our table, I could see his arm was in a sling and he had the expression of a wounded deer. He was sipping rum and coke, which, as I later found out, he ordered as Cuba Libre, in perfect Spanish. This immediately conjured images of his athletic polo playing in the Dominican Republic. Of  Fabian, the character in his novel Passion Play.  Or of  the foreign writer getting enmeshed in the surrealism of Latin America.  “I hurt my hand while skiing ” he told me, looking at his injury with seeming fascination, as if it belonged to someone else. 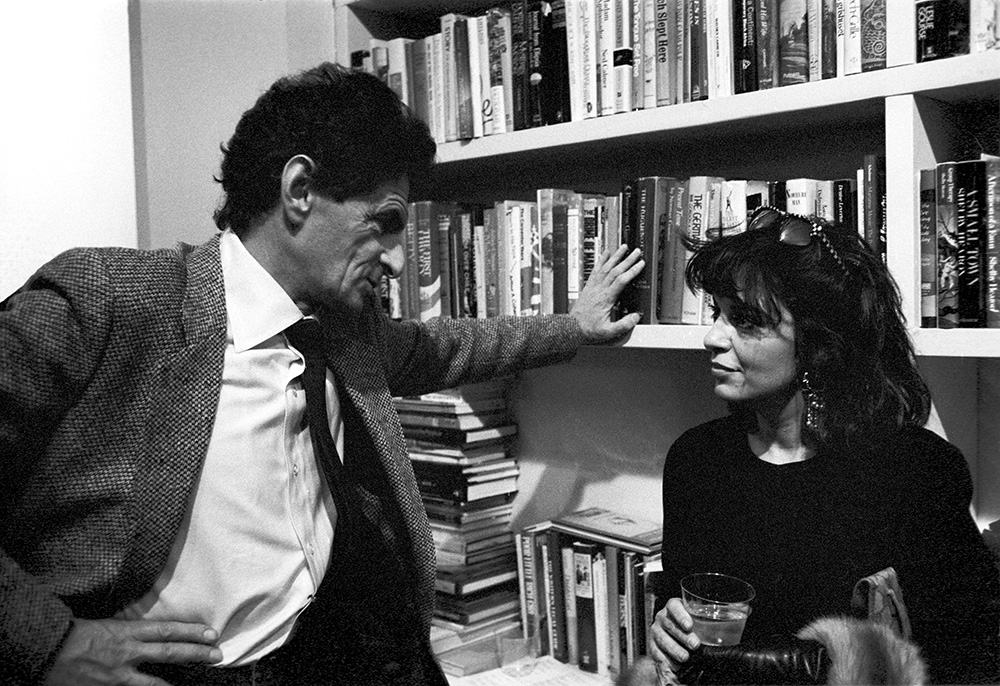 Was Kosiński inventing this, I wondered.   Two hours went by before he suggested we order dinner.The delaying tactic seemed deliberate. I played along, sipping red wine, amused by his antics.

He remarked how well I pronounced Escargot à la Bourguignonne and upon discovering my fluency in six languages, he sighed with pleasure.  Multiplicity!  You are as many people as languages you speak, the saying goes.

While picking through a sole meunière, he expressed exasperation over his dealing with Polish bureaucrats since co-founding AmerBank in Warsaw.  He yearned, he said, to go back to his writing. Undisturbed. And made it a point that he owned nothing. He did not want to be burdened with material possessions.  Just traveling light with his mischief kit. One got the sense he was a candle burning at both ends,  forever scheming and coming up with game plans.   One moment, impersonating the bolshevik revolutionary Zinoviev, a role he played in Warren Beatty’s REDS.  The next moment exhibiting the vulnerability of   Chauncey Gardiner  (Chance the gardener),  the simple-minded character he created in the novella  Being There, immortalized by Peter Sellers in the film directed  by Hal Ashby in 1979.

That often postponed dinner date stretched to four hours. Only at the very end did I decide to reveal he knew my father well.

“Son of gun” he exclaimed,  with utter disbelief.

“Touchez, Jerzy”. I managed, after all, to surprise him. It was our last encounter.